You've reached the internet home of the Poe family. Since 1997 we have served as faith missionaries with Baptist Mid-Missions.  We spent the first 14 years of our ministry as church-planters to the city of Lima, Peru.  During that time we gained experience as we worked with veteran missionaries and helped start two churches.

In 2014 a health crisis in our family caused us to be medically evacuated from Peru.  This began a series of changes in our lives that led us to our current ministry serving with Editorial Bautista Independiente.  EBI has been serving the Hispanic churches of Latin America for more than 60 years.  Our ministry allows us to help with the development, production and distribution of ministry materials and books.  We are also involved in theological training through leadership conferences, seminar consultation, and in-person and virtual training.

Please take a few moments and review our site.  Along the top of the page you'll find links to a quick overview of our ministry, our personal testimonies, our social media and latest prayer letter updates.

Here are some past news articles we hope you will enjoy: 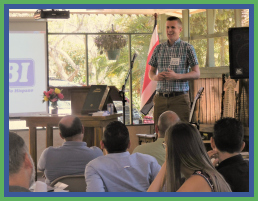 DONATE TO OUR MINISTRY 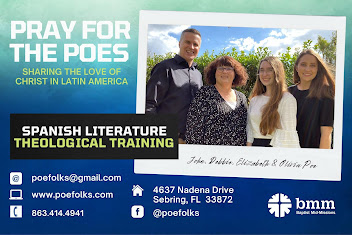 John and Debbie Poe
We are faith missionaries with Baptist Mid-Missions sent by Union Grove Baptist Church in Lexington, NC. We began our ministry in Lima, Peru in 2001 and continue to serve reaching Latin America with the Gospel through literature development and theological training.